The lifestyle of those who live around Quimsacocha, a water reservoir located 35 kilometers southwest of Cuenca, Azuay province, is threatened by mining. In 2002, the Ecuadorian government granted the Canadian company I AM GOLD's concession to exploit 8,030 hectares of the reserve, located about 4,000 meters above sea level. It is estimated that under the soils of this region lie 3.3 million ounces of gold, 10 million ounces of silver and 79 million pounds of copper.

Quimsacocha provides water to dozens of communities situated around it, including the Victoria del Portete parish that is supplied by the Irquis river. This tributary water serves for daily consumption, and is used to irrigate their plantations and must give their cows, whose milk is distributed much of southern Ecuador, including the city of Guayaquil.

Recently, I AM GOLD sold its share of the concession to INV Metals, another Canadian mining company that only awaits approval of environmental impact studies by the state to start exploitation. The inhabitants of the sector consider that while consuming much of the water from this reservoir, extraction contaminate the watersheds that supply communities. Many of them said that when the first phase of exploration was performed, the trout in the Irquis river died and suddenly the village children began to get sick.

In early 2014, the Ecuadorian government began building a Millennium School in Victoria de Portete as part of the benefits nearby communities receive due to mining concessions. Once the school is ready, students in the communities surrounding the parish must attend this new institution, since the other local schools will close. The Parish Government, mostly made up of members of the list of the current regime, has proposed to change the specialization of this school education unit from Dairy Technology for Mining and Technology in nonrenewable resources.

Now the inhabitants of Victoria de Portete are ready to fight using all possible legal bases, to resist what they call a mining imposition by the Government. Social leaders as Carlos Pérez, Federico Guzman and Angel Arpi went to jail, accused of insubordination, disturbing the peace and destruction of public property, in 2012 after protesting against mining.

"If they exploit up there I will leave, I'll have to find something else to do. Many will leave, and many others will just stay and day. What else can they do?" Said Mariano Pompilio, opposition leader of mining. 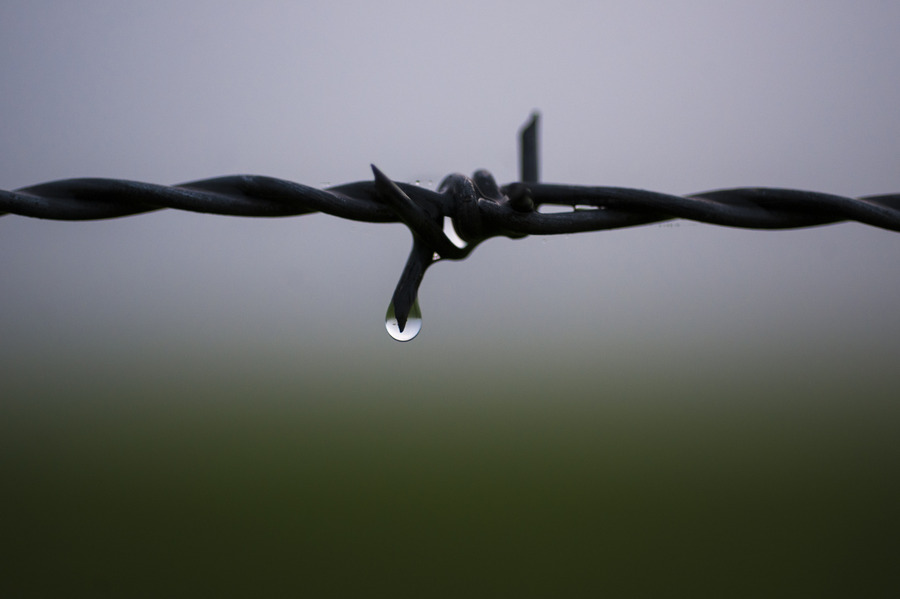 A barbed wire retains moisture after a rainy afternoon in Victoria de Portete, main opposition community to the proposed mining in Quimsacocha. 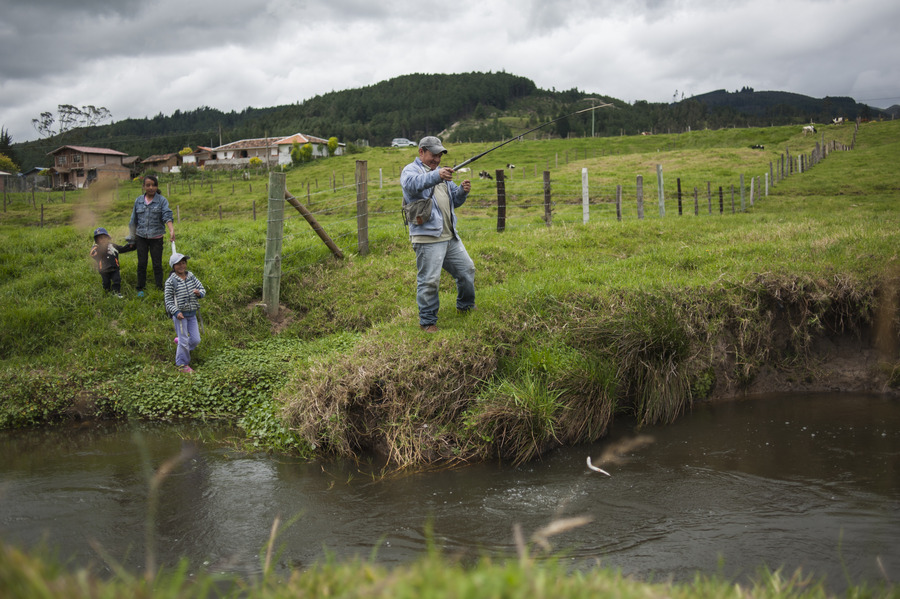 Sergio Palta fishes trouts in the river Irquis with his three daughters during a Sunday morning. During the exploration stage of mineral settlements in Quimsacocha, 2003, the pollution in the river killed much of their fish. Once the exploring ended, the mining company I am Gold planted young trouts to compensate the damage. 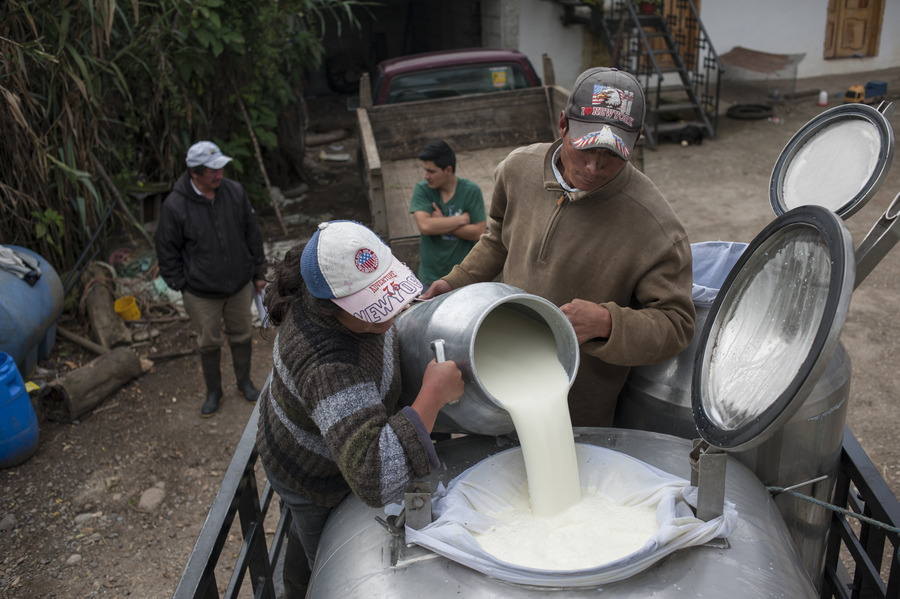 Milk production is the main economic activity Victoria de Portete. The cows subsist thanks to water coming down from the slopes of Quimsacocha. 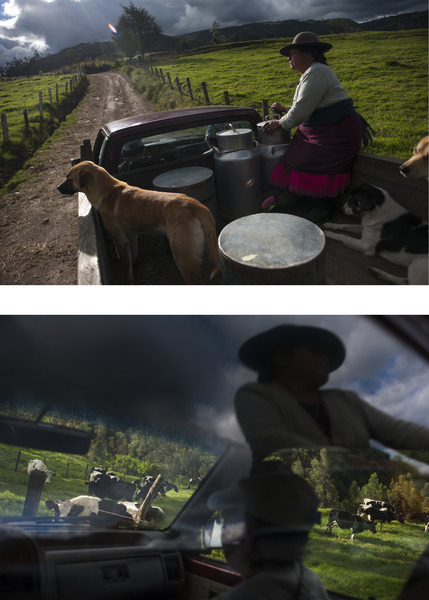 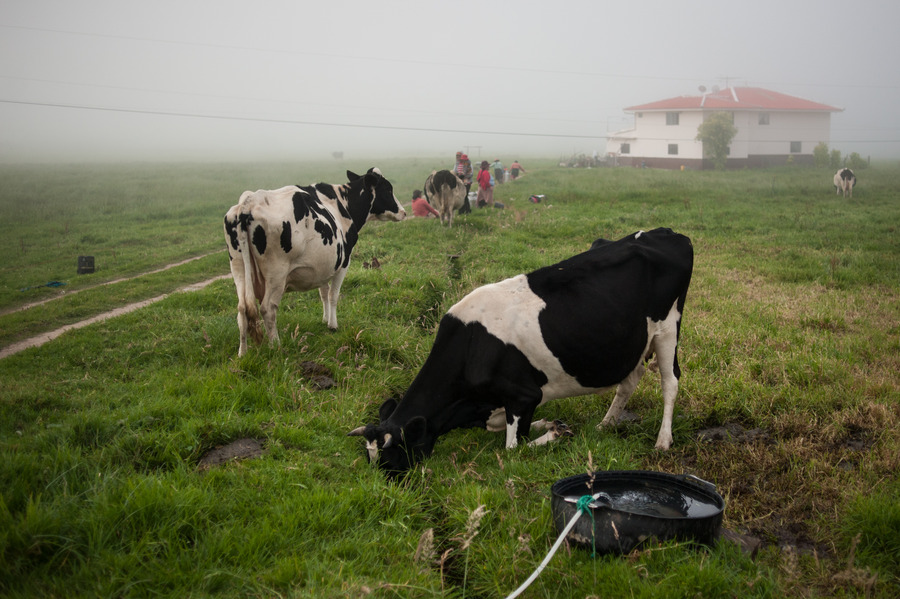 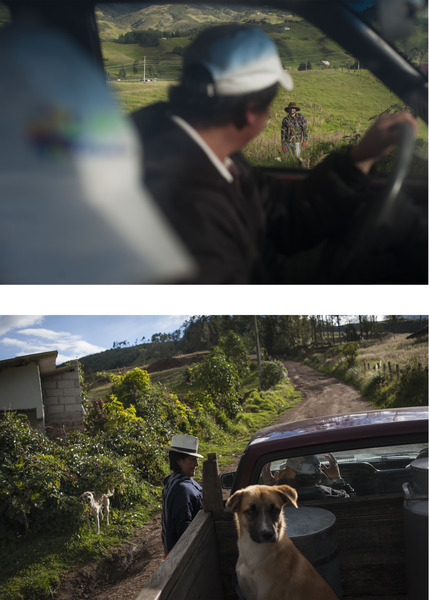 Federico Guzman, main social leader of Victoria de Portete and member of the group that discovered the mining plan at Quimsacocha in 2002, calls young people of the community to join a training lectures on anti-mining affairs. 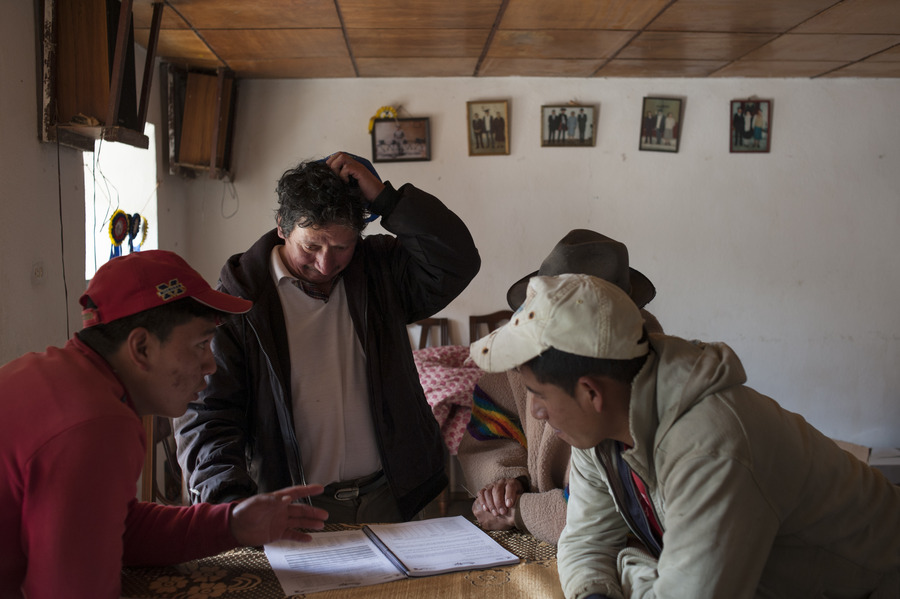 Federico Guzman, alongside fellow workers plan and equitable distribution of water in the community. 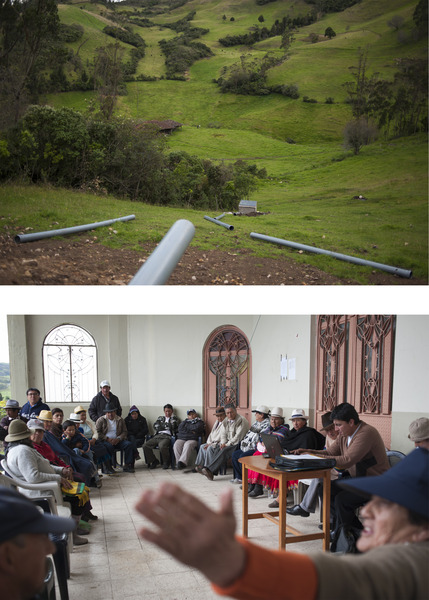 Victoria de Portete residents discussed how to effectively distribute the little water they get from the slopes of Quimsacocha in a community meeting. Through international funds, community members have built repertoires of water and irrigation systems to optimize the use of the 7 liters per second that reaches them. For mining, 60 liters per second would be used. 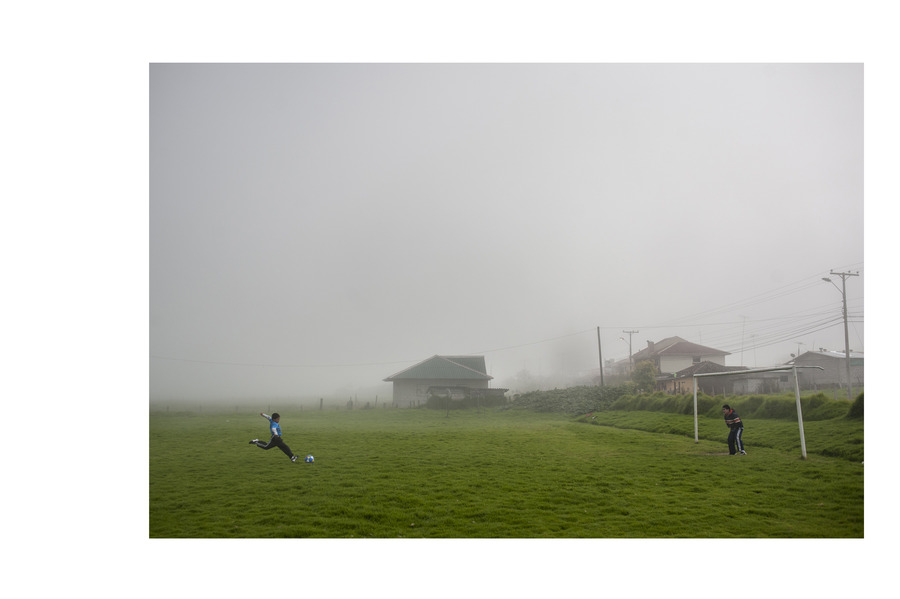 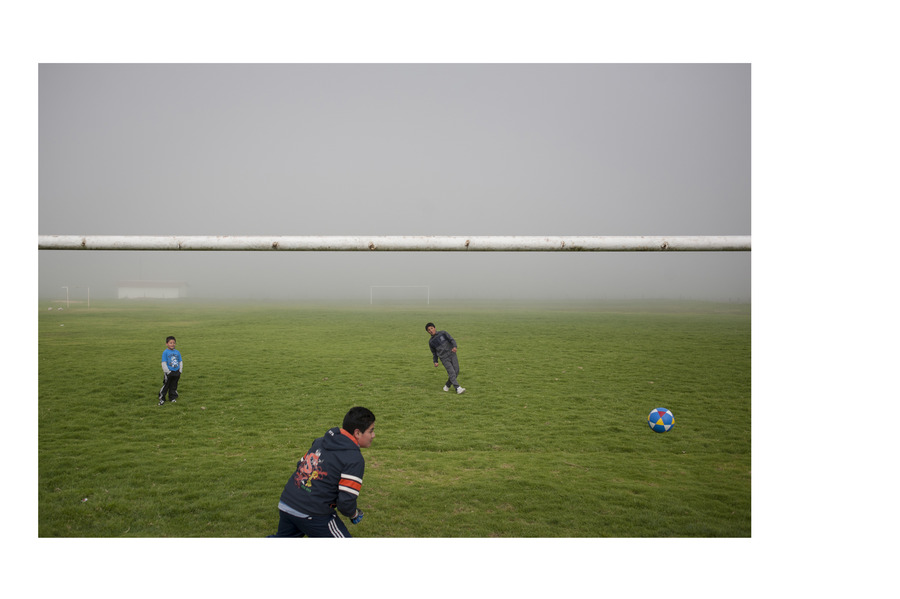 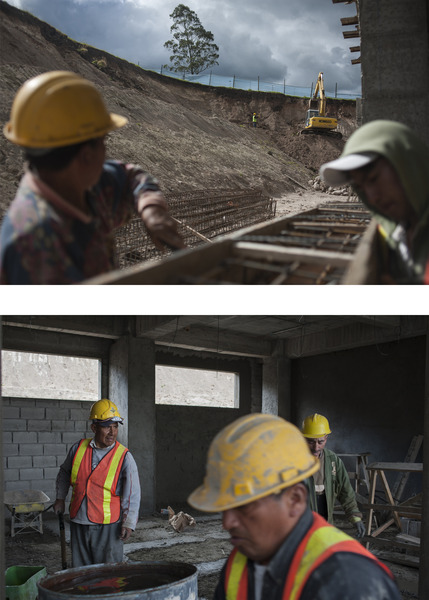 The state is building a "Millennium School" in Victoria Portete, main population opposition to the mining project in Quimsacocha. The parish government, consisting mostly of members of the government party, is considering changing this school specialization in dairy technology to technology in mining and non-renewable resources. Every young person who lives in Victoria Portete and villages surrounding it are required to attend this school. Other public educational institutions are closed.

"The children started getting sick, so we sent to analyze and say that this water is contaminated" ... "We are going to suffer somewhat, but our children, our grandchildren, great-grandchildren ... They will be poor, doomed. The only thing we live of is the water coming from up there. "- Mariano Pompilio, 84, one of the first inhabitants of Victoria de Portete to resist mining in 2002.

A piece of government propaganda with the face of Rafael Correa, ecuador's president and main promoter of extractivism is seen disfigured in the facade of a house in Victoria de Portete. During the last elections, the people of this parish resisted to vote, preventing national electoral council delegates from entering their community.

In June 22nd of 2014, the March for Water, Life and Dignity of the People started. This crossed the country in protest against the current government's extractive policies.

Members of the national police prevent civil cars from help the demonstrators to move to the next town.

Rocio Shushingo checks the entrance to a false cave in the Mining Education Center in San Gerardo. This center was created by the Canadian mining company I am Gold to educate the inhabitants of San Gerardo and surrounding villages on the positive aspects of mining.

"Everything we're seeing is going to be lost" - Federico Guzmán.

Federico Guzman inspects a pile of cement in the area concessioned to INV Metals in Quimsacocha, which indicates how deep should be dug to reach the mineral reserve. In this case: 303 meters.